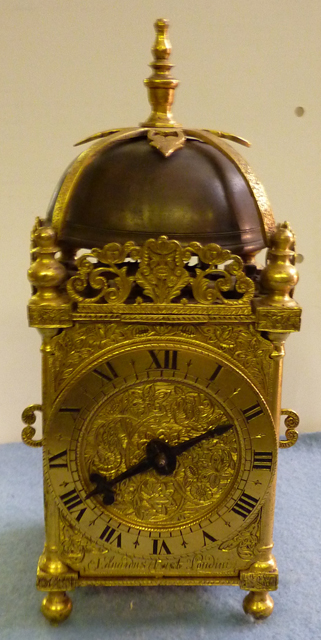 Case: both doors are scratched with the number '6228' on the inside.
Dial - engraved along the bottom: Eduardus East Londini, 19th - 20th Century

Case: Posted frame design of typical lantern clock design, with four corner pillars supporting the top and bottom movement plates and with finials at the top and bottom. Three engraved frets are screwed to the front and sides at the top. The doors, their locking buttons, the bell standard, frame edges and frets are engraved all over with a stylised design of foliate scrolls and flowers, partly in the 17th century style but executed very much in the English Victorian manner. Both doors are scratched with the number '6228' on the inside. Dial: Gilt-brass dial plate engraved all over en-suite with the frame and doors. A very thick chapter ring with hours I-XII around a quarters circle. The signature Eduardus East Londini is engraved along the bottom. The dial plate is retained by a lug at the bottom and by the front fret at the top. The single blued-steel hand is considerably dished to allow it to clear the chapter ring. Movement: Weight-driven eight-day duration movement. The three movement bars are located in normal lantern clock manner, by lugs at the bottom and wedges at the top. The train of gears does not relate in any way to the 17th century in style and the second wheel bears in a separate bridge/block screwed to the inside of the front plate. Verge escapement with pendulum control, the verge pivoting a front cock and with a knife edge at the back. Both the verge bearing cocks are of very poor construction and their badly distressed condition does not relate to the condition of the rest of the clock. The rope drive is of Huygens endless cord system with the ratchet on the striking train great wheel. However, instead of the usual spring ratchet acting on the crossings of the great wheel, there is a finely made ratchet acting on a wheel mounted on the shroud. Count-wheel controlled hour striking with standard hoop wheel locking, striking on a bell mounted at the top of the clock. Notes: Cescinsky and Webster in English Domestic Clocks, describe this clock as a near perfect example of an English lantern clock only unusual in going for eight days. George White on the other hand in English Lantern Clocks questions its authenticity and quite rightly draws attention to the many inconsistencies which exist in the design and execution of the clock as well as to the spurious nature of the signature on the front. At best this is a spurious clock based on an original 17th century lantern clock frame. At worst it is a complete 19th or perhaps early 20th century fake. Literature: George White, English Lantern Clocks, 1989, pp.447-449, figs.X/19. Cescinsky and Webster, English Domestic Clocks, 1913, fig.35. Gerhard König, Die Uhr, Berlin 1991, ill.36.