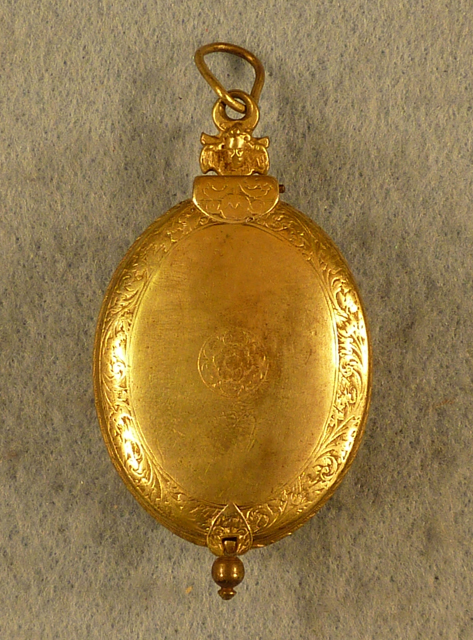 Dial: The central area is engraved with three figures of death [skeletons], the central larger one with a scythe, flanked by two smaller each with a sand glass on its head. Three legends, "Talis eram qualis es" and "Talis eris qualis sum&qu, c. 1610 - 1615

Case: Oval gilt-brass case with integral back and hinged lid. The back of the case is plain except for a foliate border around the outside and a rosette in the centre. Also there is a rotating cover for the winding hole. The lid is decorated on the outside in a similar manner to the back, the hinge block with a mask. The inside of the lid is engraved with a wreath. Between upper and lower mouldings, is an applied silver band engraved with foliate scrolls, grotesque dog's heads and rabbits. Cast, gilt-brass pendant in the form of a winged cherub's head, the loose ring now missing. The brass finial is a replacement. The pendant is supported by a rectangular gilt-brass plate with hatched decoration. The case-catch appears to be a replacement of the C spring/sliding bar type. Dial: Gilt-brass dial pinned to the front plate. The spandrel spaces around the outside are engraved with foliate scrolls with a winged cherub's head at the top and adorsed grotesques at the bottom. Engraved chapter ring with a hours I-XII and * half-hour marks between two circles. Twelve touch-pins around the outside, the one at XII now filed off. The central area of the dial engraved with three figures of death [skeletons], the central larger one with a scythe, flanked by two smaller each with a sand glass on its head. Three legends, "Talis eram qualis es" and "Talis eris qualis sum" and around the top, "Nobilem ex Rustico distingue". Single blued-steel hand. Movement: Oval gilt-brass case with four baluster pillars. An engraved foliate border around the edge of the back-plate. Extensive foliate border around the verge aperture. Gilt-brass barrel with dovetailed cap and riveted steel hook. Ratchet and click set-up mounted on the back plate, the gilt-brass click pierced and engraved with foliate scrolls, the blued steel ratchet wheel probably not original. Fusee with gut line and standard stop-work. Three wheel train of gilt-brass wheels, the second wheel with four crossings, the contrate with three [the contrate wheel possibly not original]. Verge escapement, the wheel probably original, the six leaf pinion a replacement. Riveted potence and counter potence, the former scroll shaped and with hatched decoration on the visible side. The verge and balance are not original. Gilt-brass pierced foliate balance cock, pinned to a stud on the back-plate. The movement is signed on the back-plate:- John Wright 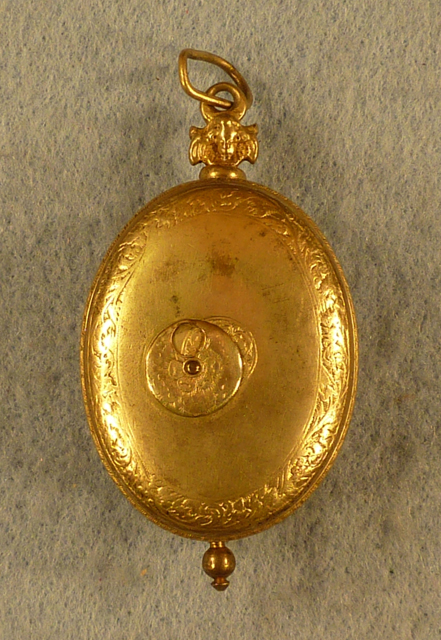 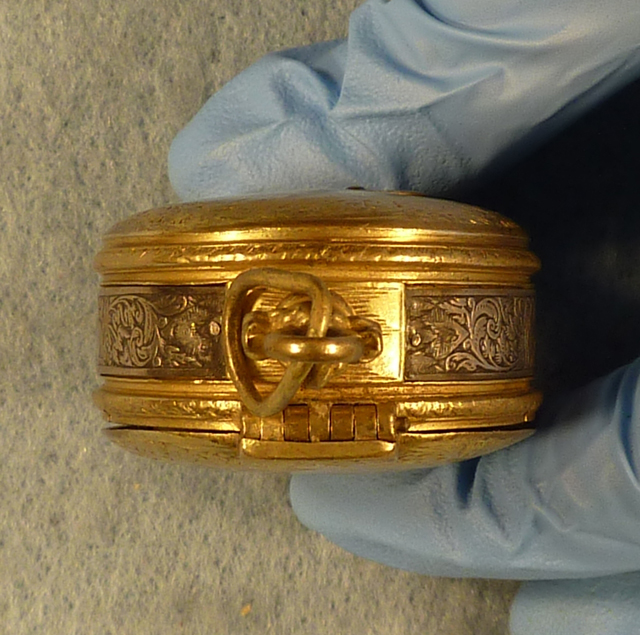 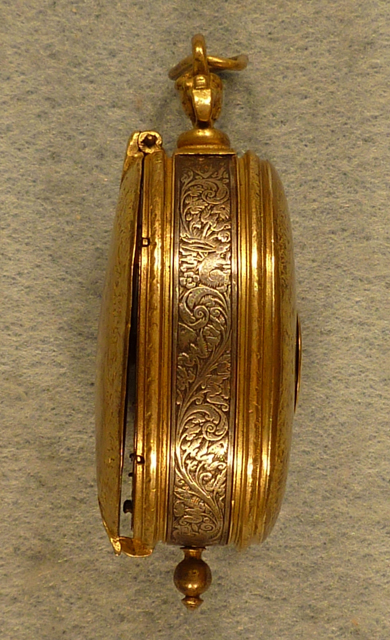 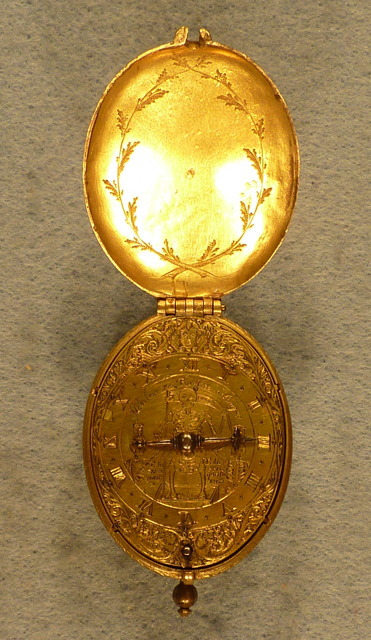 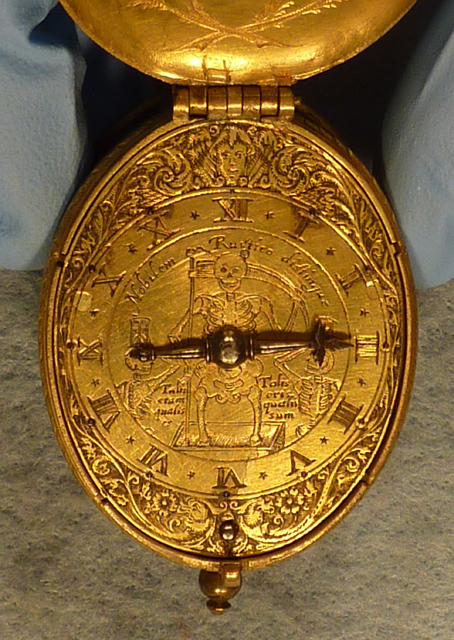 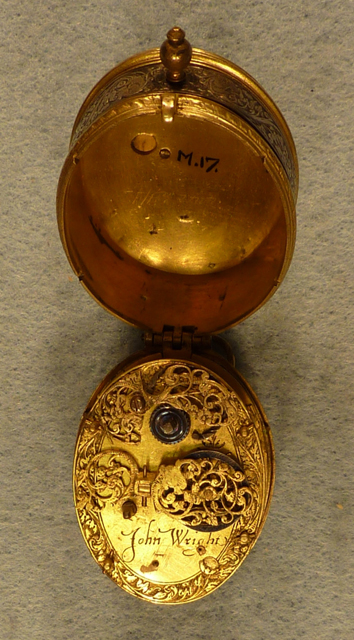 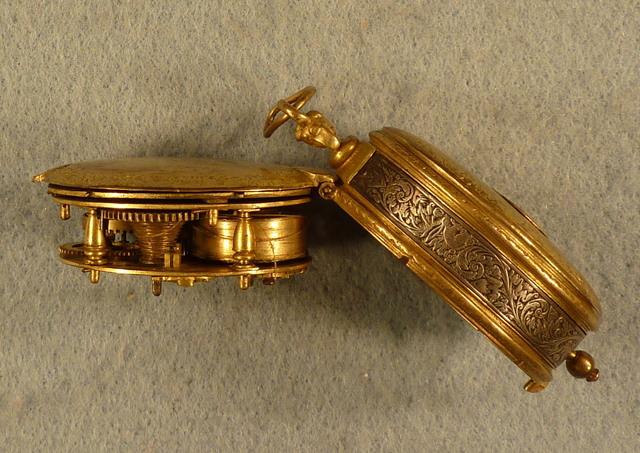 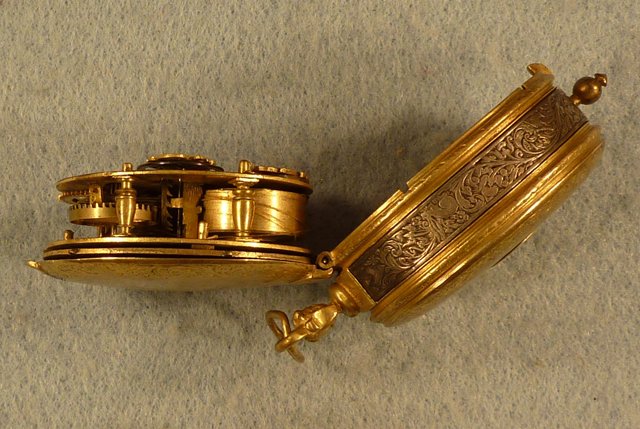